It had been awhile since I had tasted through the line-up of wines from Robison Ranch Cellars, so last Friday we sat down with Robison Ranch Cellars partner and winemaker, Brad Riordan and tasted through their wines. We were overwhelmed about how polished and so approachable these wines were. Many of them were also sourced from Walla Walla fruit and their flavor profiles told us their Walla Walla story.

While we were tasting through the wines, Brad and I remininiced about how he first got started with his winery partner, Jim Robison.  I remember Brad and Jim bringing me samples of their wines. In return I  would critique, but more than often give them wine notes of the flavor profiles these wines were showing off. Later, Jim would corner me with a serious posture, look at me square in the face, eye to eye, and ask, "Now tell me the truth. Are these wines any good?"  ﻿﻿﻿﻿﻿﻿﻿﻿﻿﻿﻿﻿

﻿﻿﻿﻿﻿﻿﻿﻿﻿﻿Jim Robison, of Robison Ranch, a third-generation family-owned ranch is located in Walla Walla County. Robison Ranch was acquired by Jim's father, Lester Robison at the beginning of the 20th century. Jim lived and worked on the ranch his entire life. Jim’s wife Jane had been his partner on the ranch for over 60 years. He was one of those wheat ranchers who was delighted that the wine industry had taken root in the Valley and followed the growth of the wine industry with great interest.

One afternoon I was visiting with Jim Robison and although he was a long-standing generation wheat farmer in the Walla Walla Valley, he told me how he liked the wine industry and how they (the wine industry) had contributed to the valley. It was so refreshing to hear, although it was really no surprise, especially when Robison Ranch had also owned a specialty foods company featuring agriculture products such as pickled vegetables (asparagus, green beans, etc), Walla Walla Sweet Onions and was also one of the nation’s largest producers of shallots. So it seemed only natural Jim and his wife Jane would take the next step and open a winery. 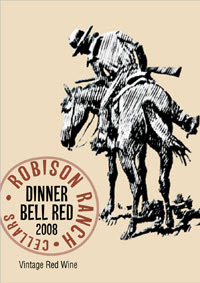 The logo of the winery reflected Jim's collection of western art. He remembers his dad Lester talk about attending the Calgary Stampede in Canada in the early 1900’s. It was there where he met Western artist Charles Russell.  Russell made quite an impression on Jim's father Lester and later onto Jim.  In the early 70’s, Jim & Jane attained the Russell pencil sketch, “The Tracker”  and the rights to use it as their logo. “The Tracker” has been synonymous with Robison Ranch quality ever since.

It was always such a pleasure to visit with Jim and Brad at one of their private gatherings at the winery, as Jim had another skill I had not been aware of -  he was a tremendous cook and knew how to put on a lavish party. He would cook for a week or so  and by the time he decorated the 20 some foot table, it was a "smorgasboard" with all of the decorative touches of Martha Stewart, herself.  As I often stood back and watched, there was no doubt in my mind that Jim was a host with the most and loved to see people enjoy themselves.

After tasting through the impressive line-up of wines on Friday, Jim had been on my mind all weekend. Yesterday, Brad shared with me that Jim, at the age of 84, died at his ranch yesterday.

Jim was one of those people that I think of as a true Walla Walla legend. My lasting impression of Jim was that of a vibrant and proud man who took life with zest and accomplished everything successfully that he sought out to do. I am grateful for the short time I got to share the same world with him.
Posted by wild walla walla wine woman at 10:51 AM