The Weekly Walla Walla Wine Word for Dummies is: Trockenbeerenauslese

I dare you to say it three times really-really fast. 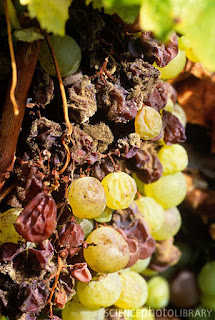 Chances are pretty great that you won't hear this word much in the tasting rooms of Walla Walla, as Trockenbeerenauslese (literal meaning: "dried berries selection") is a Germanic wine term for a medium to full body dessert wine (usually the Riesling grape). It is the highest in sugar content in  Austrian and German wine classifications.

Trockenbeerenauslese wines, often called "TBA" for short, are made from individually selected grapes affected by "Noble Rot," i.e. "botrytized" grapes.You may be familiar with Sauternes, which is another botrytized wine from the Sauternais region of the Graves section in Bordeaux (yoo-hoo Chateau dYquem, anyone?). Sauternes are made from Sémillon, Sauvignon Blanc, and Muscadelle grapes that have also been affected by noble rot.


In fact, the President and Mrs. Obama hosted President Hu of China for an official state dinner a year ago in January. At the request of the Chinese Delegation, the White House arranged a “quintessentially American” evening, complete with a menu, decor, and entertainment that reflected some of the nation’s most recognizable offerings.


Proud to say that the 2008 Poet's Leap Botrytis Riesling was one of only three wines (two being from Washington State and one California wine) poured that evening, and was served with apple pie and vanilla ice cream.


These terms mean that grapes have been infected with botrytis cinerea (aka Noble Rot). The fruit becomes shrivelled, and often to the point of appearing like a raisin. This dusty looking mold wrinkles and contracts the liquid from the grapes therefore giving the wine, used from these grapes, very sweet and  intense rich profiles, such as caramel and honey aromas and rich stone fruit flavors - like peach and apricots.