The Weekly Walla Walla Wine Word for Dummies is: Phylloxera 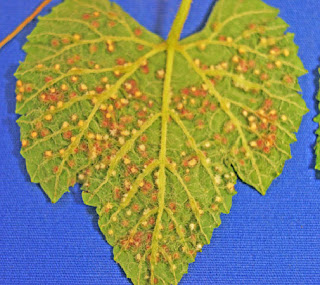 Frankly, we shouldn't even be discussing this word. It is bad ju-ju. However, if you want to become an affluent wine-geek, we must acknowledge this as it is a big part of wine world history.

Phylloxera is a creepy little sap-eating louse that enjoys making a meal out of vine roots. Related to an aphid, the little bugger feeds on leaves and roots of the grape vines which produces a gall on grape leaves causing nodules and eventually killing the vine.

It came close to destroying the wine industry of France after its accidental introduction around 1860.

The good news is it was discovered that the grafting of susceptible European vines onto resistant North American rootstock saved what was left of the European vineyards. Had American rootstock not been available and used, there would be no wine industry in Europe or most of the new wine world - - and not even any  Walla Walla vines and wines. Boo-hoo! 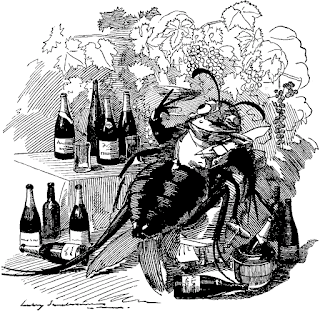 You have completely missed the point, Washington (and parts of Argentia which are exactly like Washington, i.e. high desert, irrigation, and basalt bedrock)are the ONLY places in the World that do NOT have Phylloxera.

Thus our wine grapes are grown on true roots, which allow for all the characteristics of that particular variety of wine grapes to manifest into the resulting wine.

This is what makes Washington unique in the World of Wine and needs to be proclaimed loudly.

Washington (and parts of Argentina which are exactly like Washington, i.e. high desert, irrigated agriculture, and basalt bedrock) do NOT have Phylloxera and therefore can grow their winegrapes on true root stock.

This allows for full varietal characteristics to manifest thru into the resulting wines, providing for a much fuller wine when compared to any of the competition, including France.

Thanks for checking in, however I didn't miss the point because my only point and intention was to briefly share exactly what phylloxera is (person, place or thing?)and doing so without getting into much of the history and geography. These was not a thesis on phylloxera, but merely a brief description on the pest itself.

However, thank you for sharing some extra information about Washington state and it's desert and bedrock. While it is true that much of Washington is high desert, that is not true of the Walla Walla Valley.