An Afternoon with Figgins Family Wine 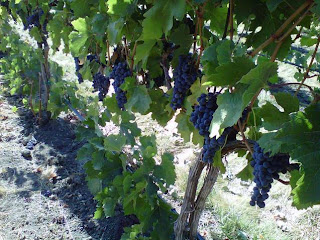 If an early October afternoon spent on the Figgins Estate Vineyard, located at the foothills of the Blue Mountains, doesn't get you in the mood for autumn and good wine, then I do not know what will.

The winding roads led us through the pristine vineyards where the first pick of merlot from the 2012 season had begun just two days before. The 32 acres, originally home to amber waves of grain, are now planted in cabernet, merlot, and petit verdot. Lime stone posts and lavender plants mark the beginning of the rows of these Old World-style clones. As we reached the top of the almost 1,700 feet elevation destination, we could see the foothills were still dominant with shades of gold colors from the earlier harvested wheat.

What was this sound we heard from the background?  The welcoming sounds of the country - Bluegrass tunes. What was the smoky air and smells all about? The smells of grilled beef  (Lostine Cattle Co., of course from the Figgins Family) and onions and even bales of hay.

We were met with a glass of white wine - a glass of Figgins Family Riesling - 2011.  A rare sight is a glass of white from the Figgins/Leonetti Family, or at least a rare sight in this century. Gary Figgins, founder and winemaker of Leonetti Cellar released his very first wine back in 1978 and in fact, it was a riesling. Later the focus for the Figgins family would be their world-class Leonetti Cellar cabernet sauvignon, merlot, and a sighting of Sangiovese, here and there.  Over thirty years later,  son Chris Figgins would bring this grape back with the first vintage in 2010. Tucked amongst his Bordeaux vines is a small half-acre dedicated to riesling vines. 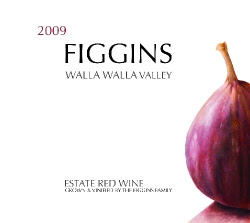 The sun was out with a bit of coolness from the autumnal mountain air;  so the dry yet, fruit forward wine was pleasing on the palate. Floral and orchard nose. Crisp and clean with a little of the exotic fruit on the finish.  I took the opportunity to pair this wine with a cup of creamy butternut squash and sage soup that was being offered. Indeed a wine that has come full circle for the family.


The next wine was a surprise - a pinot noir from the Willamette Valley in Oregon. We were told that Chris is experimenting with this grape and the wine is not for sale at this time.  Since I had just came back from a visit to the Willamette, I was anxious to give it a sip.  Dark lovely fruit and what I think was made in traditional Walla Walla fashion, as this was no wimpy light strawberry-colored wine. There were some serious lip-smacking tannins at the end.  A wine that could rest for a while and with that rest will show off with an elegant future.  Excited to see where this grape will lead the Figgins Family.

Finally, what I had been waiting for - - the 2009 Figgins Estate Family Red.  I had sipped on it when it was first released, but anxious to see how it had aged just in the last six months.  Can I just say, "Wow!" without having to give lots of flowery notes?

First of all, the Figgins label needs some recognition as it was painted by Walla Walla artist, Todd Tealander.  Todd is known in the valley for his still life and nature-themed paintings. The fig on the side of the label stands for "The Son of Fig," a British surname for Figgins and how appropriate since Chris is the son of Gary Figgins, who is known for his world class wines. 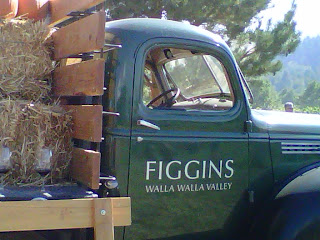 Okay, so back to my "Wow!" Figgins - 2009 is the second release for this red blend of cabernet sauvignon, merlot and petit verdot. A garden of roses and rich soil shows off on the nose, and with just a touch of sweet bran. Perhaps from the many years of wheat that was grown nearby? Dark stone fruit of plums and cherries on the palate. I saved my generous sandwich of grilled and sliced Lostine beef and caramelized onions for this wine pairing.  Truly a beautiful red wine.

So with the high elevation,  sun, fresh air, beautiful wines, excellent food and wonderful hospitality,  it was time to go back to town. It was  all of the makings for a Saturday afternoon nap while day dreaming of that beautiful glass of red "Wow!"
Posted by wild walla walla wine woman at 8:00 AM