We're told it starts in the vineyard and with some wines, they indeed tell the story of the vines ... 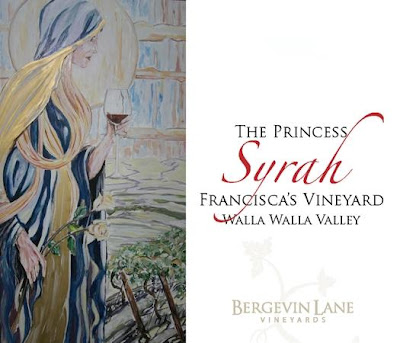 The Princess Syrah - 2009 produced by Bergevin Lane tells a story. It is a classic Washington State 100% syrah produced with fruit sourced from Francisca’s Vineyard in the Walla Walla Valley. Located south of town, Francisca's Vineyard is over six acres and planted in Rhone varietals - over 4 acres planted in syrah and over 2 acres in viognier.

Vineyard owners, Francisca van Heezik and Tim Rogan have a love of syrah and by acknowledging what they "like to drink" was their first step in deciding what vines to plant. And that is exactly what they did - in 2001 they planted Francisca's Vineyard all by themselves from tilling the soil to planting the vines.  Their hands-on approach has continued as the couple manually give all 4400 syrah vines their special touch from pruning to harvest.  In other words, these vines are treated like a princess - the royal treatment.

Bergevin Lane Vineyards is the exclusive recipient of Francisca's syrah and the wine is a limited production and a sought after wine that has received many accolades since its first vintage in 2006.

One cannot help notice the inky royal purple color of The Princess Syrah as it flows in the glass. This classic has a nose of blueberries, Nutella chocolate-Hazelnut spread, smoked bacon and violets. Kind of like a extravagant breakfast in bed that is fit for a princess: from the bowl of blueberries to the violets in the flower vase on the breakfast tray.

A sip on the palate expresses notes of cocoa, dark stone fruit, a touch of mineral, rich earth and ends with spice. Concentrated. Elegant. The right touch of tannins to make one smack their lips, while still giving assurance that this wine has an ability to rest and will awake smooth and just as elegant as ever.

No doubt this wine is to be celebrated with food. Roasted meats,  grilled caramelized vegetables, French onion soup, and even a bacon cheeseburger and a piece of dark chocolate cake.

I think The Princess Syrah should come with a tiara.
Posted by wild walla walla wine woman at 8:00 AM