When Miles, from the movie Sideways, was convincing wine consumers to forsake merlot for pinot noir, I was doing just the opposite. Forsaking pinot noir for merlot - especially merlot produced in Washington State. There was barely a bottle of pinot noir in my wine collection - barely? I should say, "none."

Oh wait, there were a few bottles of pinot noir hanging around from Lazy Creek Vineyards in the Alexander Valley, California and also a bottle of Williamette Valley's Erath - - both exceptional wines, yet both given to me as gifts. While I appreciated the thoughtfulness and appreciated the masters and the craftsmanship of these wines - - ehh.  They just didn't speak to me - they didn't say, "Catie, run away with me! I am the Pinot Noir you've been searching for." 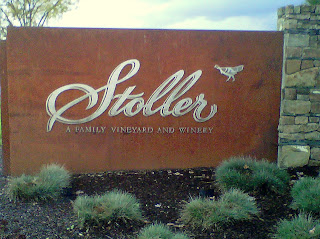 I really didn't take notice of pinot noir until one day when a certain bottle entered my home. The bottle was opened, glasses were poured and I just cannot explain it - - but it was this bottle of pinot noir from Stoller Family Estate and Vineyards  that truly inspired me - - it made me want to take another look at this blackish-purple persnickety little grape.  It also inspired me to visit the Stoller Family Estate & Vineyards in August of 2008 - - and of course, after my visit I left - well, inspired! Inspired to taste more pinot noir, but still not enough to make me divorce my beloved Washington State Merlot - - but close.

You can only imagine how I felt when I received an invite to attend a pre-function at Stoller in the Willamette Valley before the August 2012 Wine Bloggers Conference  held in Portland, Oregon. I immediately responded ASAP with my RSVP!

About thirteen of us enthusiastic wine bloggers boarded a yellow school bus in front of our hotel that Thursday before the weekend conference. We were warmly greeted by Sebastien Telford-Rake, Stoller's representative of Event Logistics and Sales.  Sebastien was our host-with-the-most as he gave us an introduction and a tour on our way through the Willamette to Dayton, OR.  We were told there was some history behind hauling wine lovers in a school bus, as these bright yellow machines are used every summer at Pinot Wine Camp. Okay - so this was going to be an educational tour, right?  The best kind of education, I say.

We arrived at Stoller and was immediately greeted with a glass of their beautiful and thirst quenching pinot noir rosé - 2011. I had remembered this rosé from my first visit in 2008. And like four years ago in August and also during the same weekend, it was hot - record number temps. The rosé was cool and crisp. My parched throat could not get enough of this pink liquid with notes of ruby red grapefruit and a nose of strawberries and rose petals. It brought back memories of how four years earlier I sipped a bottle of Stoller rosé paired with a wedge of Tillamook cheese, local smoked salmon, local Oregon berries and a view of the beautiful Pacific Ocean at Lincoln City.  Isn't that what wine is suppose to do - invoke memories? I think that is the beauty of wine.

We sipped on our wine as Sebastien led us down the path to the vineyards. Once again I remembered my past visit while I sipped on wine and walked through the rows of lush vines. Oh sure, a few things have changed at Stoller since my visit - in fact, they were almost near the completion of their new tasting room. And being true to the Stoller standards of their LEED (Leadership in Energy and Environmental Design) certification, the new building is constructed of reclaimed scorched wood from one of Oregon's largest forest fires, as well as a 236 solar panel roof  (see video).

Our haven to relax was a cool and grassy park-like area with many old shade trees across from the vineyard where Robert Schultz, vineyard manager shared with our group about the Stoller vines, soil, climate and even about the Dijon/Burgundy clones. Stoller is the largest vineyard site in the Dundee Hills of Oregon with 373 acres and with around 180 of it in vines.  The vineyard is divided into 83 sections. While Stoller is known for their pinot noir, 30% of the vines are chardonnay, 5% is pinot gris and with riesling, tempranillo, syrah, and pinot blanc at about 1 percent each.

The area where we rested was part of the former turkey farm that was owned by the Stoller Family, which gives us some idea behind the turkey on much of their labeling. What started out as pets, the Stoller farm grew to be the largest turkey facility in Oregon. In 1993 when the turkey farmed closed, Bill and Cathy Stoller planted the world-class vineyard.

The "Vintners Lunch" from the popular Red Hill Market, located in an old historic building at Dundee, was served. The brown bag was a welcome sight and the contents were oh-so delicious! We sipped on the Stoller JV Estate Chardonnay - 2011, Riesling - 2011, and of course what we came to taste; a pinot noir - Stoller JV Estate from 2009.  I didn't think I was that hungry until I bit into a delicious  sandwich and tucked in between the bread was Italian salami, provolone, arugula, whole grain mustard, olive oil, and a skoosh of salt & pepper. Later, the thick large cookie I pulled out of the bag came as a surprise as I bit into a chewiness of nuts - - and bacon! I ended up nibbling on it clear up to the early evening.

After lunch we headed back to the winery and such a relief to escape the high temps. Who knew that Oregon could get so hot! We went to the fermenting area and sipped on more chardonnay. What made this tasting, unlike others, is that our host Sebastien poured for us a horizontal of wines sourced from the Stoller Vineyards, but produced by other wineries including: Adelsheim Vineyard, Chehalem Wines and Stoller. Of course there were similarities, but I was reminded by the old song from Sesame Street sung by the Muppets, "One of These Things (is Not Like the Others)." In my mind, the Stoller won hands down and I think that was the group's conclusion, as well.

Our group trekked down to the coolness of the cellar. Stoller SV Pinot Noir - 2008 was poured. I pondered this glass from their finest vineyard block. Violets, Bing cherries, and dark earth on the nose.  Heavy dark stone fruit on the palate along with licorice and more dark cherries. Indeed - 2008 was a good year for this wine and a year of memories for me as I lapsed back through my visit of 2008 and my walk through these same vineyards while  looking at the promised fruit that would soon be picked.

It was there in the cellar we were privileged to taste a special bottling of pinot noir. All three of these wines were named after the women in Bill Stoller's family. Starting with Helen's Reserve, Nancy's Reserve and for Bill's late wife, Cathy's Reserve who recently died last December. All three of these 2008 vintages were dark red, bold, rich and elegant wines. I imagined these wines were very much like the women they were named after.

Towards the end our visit with the Stoller Estate, we met with their winemaker, Melissa Burr.  Melissa told us her journey about winemaking in the area and how she finally landed at Stoller in 2003.  After working harvest for more than three years at several other local wineries, and being raised in the Willamette Valley, her background of being with the fruit first hand and being familiar with the unique terroir definitely shows with the first sip of her wines - perhaps with a feminine and nurturing touch that understands this finicky and elusive grape.


Our blogging tour group left very happy after a great day and especially to be given by Melissa a signed bottle of the Stoller SV Estate Pinot Noir - 2008. Speaking for myself, I was not only thrilled but that particular 2008 vintage created  some lovely memories for me and how I finally learned to  love a great glass of Pinot Noir.  We also got to keep the Riedel Willamette Pinot Noir glass with Stoller's name etched on it.  Believe it or not, I held that glass on my lap during my plane jaunt home.

Later on our bus ride back to the hotel, Sebastien gifted me a limited bottle of Stoller Tempranillo to be shared with the group - - and I did. It was presented at the WBC#12 "Night of Many Bottles" Friday evening reception.  Such a treat!

Many thanks to Sebastien and everyone at Stoller for their wonderful and generous hospitality - the day was truly a highlight of my visit to the area. Perhaps after a few more visits I may divorce merlot after all and take up with a glass of Stoller Pinot Noir, instead.
Posted by wild walla walla wine woman at 8:00 AM

Wow! What a wonderful experience and an equally compelling write-up! I can see why you were nominated for a wine blogger award! Cheers!

Catie, I love Stoller as well... I got to go year before last and that is where they proved to me that an entire bottle of wine can fit in a Pinot Noir Glass.. I have that glass still to this day and play that game with all my friends as well. Everyone is amazed that it does hold a bottle. I call it my "Glass" of wine.

Thank you Drunken and Winey Women for checking in!