It may surprise you to hear that a local winemaker, known for his shiny Gewurtz belt buckle and hailed for his dry cool crisp Gewürztraminer, just released a Mourvèdre. 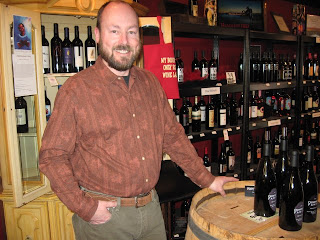 Chris Dowsett produced his first ten gallons of Gewürztraminer in junior high school. Later, he would put in a year studying wine science at Roseworthy College in the Barossa Valley of Australia. He would return to America and work harvest for Robert Mondavi. You've heard of the Mondavi name, right?

Chris would later make a move back to the Northwest, work a few years at Canoe Ridge Vineyard/Winery in Walla Walla and assist with their Columbia Valley Gewürztraminer. While winemaking at former winery, Lattitude 46, also in the Walla Walla Valley, Chris would also produce a dry barrel fermented Gewürztraminer under the Lattitude 46 label. In 2007,  he would become winemaker for Artifex Wine Company in Walla Walla. It was there, at this world-class custom crush facility, that Dowsett Family Wines was conceived with its first 300 cases of wine. Chris has since moved on from Artifex, but when Chris isn't producing his own wines, he is now the head winemaker for Buty Winery, also in Walla Walla. 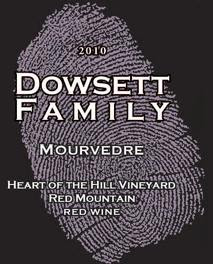 So with all of this background in a white wine with strong Germanic roots, it seems rather an extreme to make a red wine with French roots and is the latter, but prominent component in "GSM" blends where Mourvèdre is the "M" blended with "G" for Grenache and "S" for Syrah. However, if you are familiar with Dowsett Family "Devotion" red blend, then it makes perfect sense. "Devotion" is exactly that, a GSM styled wine and like the back label of the wine bottle says: "Three varieties, one wine."

However, this new release of a red wine is "one variety, one wine"  -- and one vineyard. Heart of the Hill Vineyard is in the Red Mountain AVA west of Walla Walla. The vineyard itself lies mid-slope and is known to be a very warm site.

The notes of Dowsett Family Heart of the Hill Mourvèdre is dark, yet bright in color. Notes of cherry and flint in the nose. The flavors are rich, with just enough tannins to remind you they are needed to be age worthy. On the palate more red berries shine through, and even a hint of licorice with a finish of black pepper. Spicy.

This is a wine meant to be paired with foods: roasted and grilled meats (I understand Chris eats a lot of lamb due to an active 4-H family), and spicy sausages. However, if you prefer more vegetables dishes such as chili rellenos, grilled vegetables of charred eggplant, summer squash, peppers, and mushrooms.

I wouldn't hesitate to grab this very special bottle of wine.