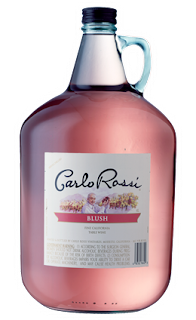 Nope. No way. No how. Don't use it (and I recommend not to drink it either, unless you truly are a fan of very sweet wines and want a big headache). I don't care what you have heard, those traditional pretty pink Old World wines and finally those from the New World, are not "blush." Blush is the term used after your grandmother pinches you on the cheeks or the wines from your grandma's bridge games. It's oh-so-1978.

In fact, in 1976 the name "Blush" was originally started as a joke by a California viticulturist, Charles Kreck, who would later trademark it. However, his own grandson, a winemaker, even chose not to use the term for his own wines.

In France these light wines of various shades of pink are referred to as rosé and often the same French name for the word, "pinkish," is used in the New World of winemaking. In Spain and Portugal, these darling pink wines are named, rosado and in Italy, they are referred to as, rosato.

And with that said, if I had my way I wouldn't use the term, "white zin" either as the zinfandel grape is not white - - and then there is the name, fume' blanc - - but that is, after all, another Weekly Walla Walla Wine Word for Dummies.
Posted by wild walla walla wine woman at 8:00 AM