A few months ago, a friend sent me an email asking my help to solve a bet. He was told there were over 400 wineries in the Walla Walla Valley and my friend knew this claim was grossly incorrect. According to the Washington Wine Commission, there are just over 700 wineries in Washington State. In Walla Walla, depending on the day and the direction of the wind, there might be anywhere between 105 - 125 wineries in the Valley. One never knows when a new winery in Walla Walla will pop up and when they do, those that are out of the ordinary in their mission statement and of course, quality of their wines will capture my attention.

Fjellene Cellars (Fyel-LAY-Nuh) is one of those new wineries that has captured my attention. Fjellene Cellars was founded by Matthew and Sarah Erlandson in 2008. The winery gets its title from a Norwegian name for "mountains."

Matthew's mission is about planet earth and it is more than just words for him, as he was an outdoor educator and mountain guide across the globe for 13 years. Not only statewide, but internationally, as well. While employed at Northern Arizona University, he took a three month leave to come to Washington State to dabble in wine making. Shall we say the rest is history ... as he immediately went back down to Arizona, gave notice, and ... his first wines were released earlier this year.

The first vintages of Fjellene Cellars were 2007, 2008 and 2009 and produced while he was an assistant at Beresan and Balboa Wineries. Matthew is dedicated to crafting distinct, varietal-specific wines with sustainability in mind. The Erlandson's mission is to create elegant, approachable and food friendly wines that deliver back to the earth. And once again, these statements are more than just words as it shows from the very beginning to the grape pumice and stems reduced to compost by local farmers to the very end with natural cork closures and clean, yet elegant packaging.

Once the attractive bottle is opened, a wine enthusiast will find the wines of Fjellene Cellars are vineyard designated wines that showcase the fruit and terroir of Washington State from as far as Yakima and the Columbia Gorge to local vineyards in Walla Walla. The repertoire of Fjellene 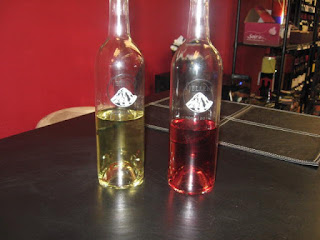 My personal favorites? 2007 North Col Blend (almost gone at the winery), 2008 Cabernet Franc (sold out), 2010 Syrah Rosé (swoon worthy and first place winner at the 9th Annual Rosé Revival in Seattle held at Ray's Boathouse) and the 2010 Sauvignon Blanc (crisp and so refreshing).

This spring I was fortunate to be seated next to Sarah and Matthew at a local wine dinner. I so enjoyed listening to each side of their story about how Fjellene came to be, as well as their faith and pride in each other. I also knew Matthew was my kind of person during the before dinner "cocktail hour," as he "magically" pulled out from his back coat pocket a bottle of fine French bubbly he brought with and generously poured me a glass.

In turn, later I shared with Matthew my course of corn and morel mushroom salad with foam of foie gras. I have to admit, while I love all vegetables and fungus, I am not a huge fan of liver delicacies. Matthew enjoyed the foie gras more than I ever could and I took great delight watching him relish this fine fare, as he even ran his finger inside and around the petite casserole gathering every last bit of the rich foam. It was this exuberance that reminded me and confirmed the mission of Fjellene's wines; elegant, approachable and food friendly. Not only does Matthew take pleasure with fine food, but there isn't any doubt he brings the same enthusiasm to every bottle of Fjellene wine.
Posted by wild walla walla wine woman at 8:15 AM

I love a good Cab Franc... Next time I am near Washington, I will need to find Fjellene Cellars.
It is my favorite grape this year!

I love Cab Franc, too. And I can guarantee you will also find other wines to enjoy at Fjellene.
C~

The Reserve Blend is off the charts. Pity it's not for sale... yet.

Added bonus? line up 3 or more bottles and see a panoramic mountain range.