It is always a such special treat when I am invited to a private tasting with a winemaker at their winery and especially at his or her home. So when winemaker, Josh McDaniels invited me to his house to taste the wines of Sweet Valley and Righteous Wines from Walla Walla, I knew it was going to be a great evening - and it was. With the view of vineyards from Josh's back dining room window, we tasted through the current releases and one of the most memorable - Monesia's Song.

Josh's entry into the wine business was at the age of 15. He began volunteering at local wineries while still balancing high school and athletics. After a few years of winemaking, his father David saw his enthusiasm for the business and handed him an envelope with $1,000 to start a winery. 2005 was a significant year for Josh, as not only was it his senior year of high school, but his new winery Sweet Valley bottled their very first wine.

After high school, Josh would graduate from the Enology and Viticulture Center in Walla Walla, as well as working full-time for longtime mentors, Leonetti Cellar, in addition to his winemaking duties at Sweet Valley. In a 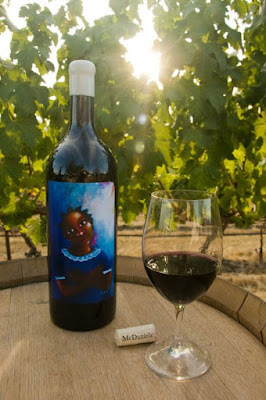 continual pursuit to broaden his knowledge and education, Josh received an internship with Paul Hobbs Wines at Vina Cobos Winery in Mendoza, Argentina.

Today, Josh continues to strengthen the wine portfolio at Sweet Valley and Righteous Wines, as well as his work with Leonetti Cellar and the newly-formed Young Guns Wine Society, a group dedicated to defining the next generation of wines and winemakers in the Walla Walla Valley.

If all of this weren't enough, recently Josh became very involved with a new project, Embracing Orphans. This non-profit organization assists in helping orphanages all around the world. Josh's passion for and involvement with Embracing Orphans led him to craft a high-end red wine called, Monesia’s Song.

During the last days of the 2007-2008 winter's school break, local junior-high teacher Carl Robanske had just returned from a visit to Jamaica and bringing back with him were the memories of Blossom Gardens, an orphanage for children from babies to age seven. After his visit, Carl could not forget the 65 children, many with mental and physical disabilities, and unfortunately a limited staff to care for their needs. But most of all, he could not forget Monesia.

It was an afternoon naptime when Carl noticed all of the children were asleep with the exception of one little girl. Monesia was a heartbroken, confused and deeply quiet child and her only form of expression was a single tear that rolled down her soft brown cheek. Carl later discovered she had been at the orphanage for two weeks and since Monesia's arrival she had never spoke a word. Carl spent many hours reading and playing with Monesia to bring her out of her shell. He used stuffed animals to carry on conversations with Monesia and eventually she laughed after being tossed in the air over and over again. As Carl embraced the small girl she unexpectedly sang to him - in a very soft tiny voice,

"How often we forget that we are loved."

Josh was inspired by this story and collaborated with Carl in an effort to raise funds to improve the quality of life for the orphaned children of Jamaica. They created a wine label that shares this reminder of the need for love with a portrait of Monesia in a bright blue dress.

"Monesia's Song" was released in the spring of 2011 and is a fine Bordeaux-style red blend of 63% Cabernet Sauvignon, 32% Petit Verdot, and 5% Merlot; sourced from some of the finest Walla Walla Valley vineyards in Washington State. The nose wafts of dark stone fruit, cigar box, black pepper and mocha. The palate has flavors of plums, dark Bing cherries and creamy, yet tangy, Rainier cherries and finishes with tones of espresso. Definitely a wine I would let rest for a few months. Only 75 cases produced.

When purchased, 30% of the cost is a financial gift to Embracing Orphans. Please contact Josh for more information at: Josh@SweetValleyWines.com
Posted by wild walla walla wine woman at 8:28 AM