Now days when discussions of the US debt ceiling have been looming above us, there's no reason why your wine cellar coffers have to take on a deficit. Blacksmith is one of those wine labels that all parties can agree upon, unless of course you truly are an invited member of a high-tea party with extended pinkie and beverage of choice is a cuppa Earl Grey or Oolong with two lumps and a spot o' cream.

Forgeron Cellars, located in Walla Walla, is located in the site of a former blacksmith shop. The name, Forgeron is a French word for "blacksmith" and also refers to artisans who craft and build with their hands. Marie-Eve Gilla, part owner and winemaker of Forgeron Cellars has been bringing to the winery her complex, yet food friendly wines since 2001. She not only sources the fruit locally, but also chooses vineyards from the entire Columbia Valley region for their maturity and flavors.

Looking to expand, Marie-Eve and her team 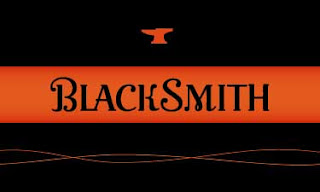 released a new wine label in November 2010 appropriately named "Blacksmith." This line-up of wines, designed for retail at wine shops and fine restaurants, contains single varietals showcasing each grape's characteristics at an exceptional price. Blacksmith will typically not be available at the winery, but once again, Marie-Eve has blacksmithed these grapes into the highest quality wines possible. In November the first release was a 2008 Syrah and a 2009 Pinot Noir. Both priced under $15 each. In fact, the 2008 Syrah was recently awarded a double gold from the 2011 Seattle Wine Awards in June.

Unforuntately the Syrah and Pinot Noir from Blacksmith is now just a memory in many of the wine shops racks and restaurant's menus, however not all is lost as Blacksmith Chardonnay - 2010 and Blacksmith Merlot - 2008 have just been released. Both priced around $15.00.

Blacksmith Chardonnay - 2010: It is this Walla Walla wine lover/blogger's opinion that Marie-Eve Gilla set a benchmark for Washington State Chardonnays. While we were drinking California's version of over-oaked and over-buttery chardonnays that were masking the fruit and terroir, Marie was earning her masters degree in enology and viticulture at the University of Dijon and apprenticing at various Burgundian wineries and vineyards. With the Blacksmith Chardonnay, Marie-Eve has given us an opportunity to sample her talents with the Chardonnay grape at an affordable price (note: her Forgeron Chardonnay is one of her most popular wines amongst a "red sea" of Forgeron's red wine offerings).

Like the Forgeron Chardonnay, Marie has given the Blacksmith a gentle touch by using 67% used oak. It’s a classic! Notes of Asian pears and honeysuckle greet the nose setting the stage for a palate of pineapple, stone fruit with hints of citrus. A porch sipper or paired with casual dining of chicken salad sandwiches, chilled prawns and fresh fruit salsas.

Blacksmith Merlot - 2008: A deep inhale from the wine glass bowl is going to tell you this Merlot is from Washington State. Not satisfied with the ordinary, Marie-Eve added 12.5% each of Zinfandel and Petit Verdot and included sources from Rattlesnake Hills, Horse Heaven Hills, Yakima Valley and Walla Walla for complexity.

Once again the majority of oak was used at 70%, while still leaving reminders of cigar box and cedar on the nose. The palate screams Washington State Merlot with those flavors of dark chocolate covered cherries, fig cookies and finishing with brown sugar, spice and pepper. Priced just right for casual sipping but exceptional enough to be used in your favorite recipes such as Julia Child's classic Boeuf Bourgignon or a real Washington state favorite of a Merlot redux drizzled over our native salmon - - and of course, affordable enough to procure an extra bottle to pair with the meal.

I will be anxious to see future Blacksmith releases. Sante!
Posted by wild walla walla wine woman at 8:02 AM