The dictionary says, the word "Tranche" is a French word meaning "slice" or "portion."

In 2004, Lauri and Michael Corliss, owners of the prestigious Corliss Estates, designed a second "slice" to add to their wine portfolio known as Tranche Cellars. Four years later, their slice became a reality when they opened the doors of their new winery at the base of their Blue Mountain Estate Vineyard on the old Berney Drive in Walla Walla.

The wines of Tranche Cellars were born out of the Corliss's curiosity to explore, not only unique blends in their cellar, but also varietals from their vineyards. The goal of Tranche Cellars is to craft wines to the same standards as their predecessor, Corliss Estates. However, it was equally important to produce quality wines with reasonable price tags. While the wines from each winery are of uncompromising quality, each label of Corliss and Tranche are produced at their own separate facilities. At this time Tranche Cellars produces around 2,000 cases per year. 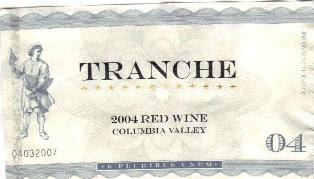 January of 2010. It was the Tranche Cellars Red - 2004, a blend of Cabernet Sauvignon, Syrah and Cabernet Franc. Obviously the wine was Tranche's first release and it definitely had some lovely age on it. A week later, I used my new discovery for a Wine Blogging Wednesday project. Wine bloggers from all over the world were asked to look out our windows and imagine snow and then imagine what wine we would like to enjoy during a "snow day." It wasn't a tough task to imagine, especially since it was January in Walla Walla and all around the valley were the snowy foothills and caps of the Blue Mountains.

Since that "snow day," I learned there are two series of wines that Tranche Cellars produces: The Slice of Pape Series and the Varietal Designation Series. I should note that I have also tasted through many of the wines from both series.

Varietal Designation Series: Tranche Cellars also produces small quantities of single varietal wines. Tranche strives for purity of character in each grape varietal while allowing the wine to express the terroir of each Washington State vineyard. Grape varietals that have been used are Barbera, Cabernet Sauvignon, Chardonnay, Pinot Gris, Syrah and of course the original Red Blend that I first discovered.

Just like I did, discover your own slice of Tranche Cellars - - and don't wait for a "snow day."

Posted by wild walla walla wine woman at 8:15 AM