Gary Vaynerchuk: Thank You and Farewell

This afternoon many "Vayniacs" watched Gary Vaynerchuk bring to his audience his
final goodbye.

Gary came onto the wine scene through Wine Library TV in 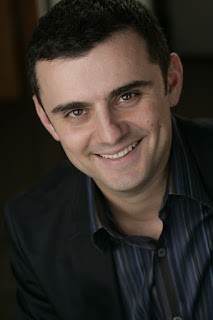 February 21, 2006 and from there he held us captive. This was a significant and controversial time in wine journalism as we watched, not only Gary come onto the scene, but many wine bloggers, as well. After 1,000 episodes of Wine Library TV, the show was retired in March 2011 and we followed him to his new video project called "The Daily Grape" for 89 episodes.

He was his own human infomercial with his strong enthusiastic New Jersey accent as he shrieked at his audience like a used car salesman or a mattress king, and those of us who were fortunate enough to meet Gary in person we found him to be soft-spoken, sweet and rather humble. He left us with the impression that he truly did care about his fans - - his "Vayniacs."

Gary had the ability to break those "snooty" wine barriers for novices and younger generations of wine lovers like no other wine critic could do. The proof that he really cared about wine and his fans was when he told his audience, with conviction that there was always going to be a wine bully and he wanted to "punch them in the face."

"The one person who did read the Wine Spectator, who tells you what to drink and why the '97 is better than the '98. I want to punch the wine bully in the face," he says. "I want to make sure this generation of wine drinkers isn't élitist and snotty. I want it to be about family and bringing people together."

Gary taught us a new set of wine vocabulary such as: sniffy-sniff, oak monster, and pop-pop-pop. He improvised wine tasting as we were introduced to non-traditional sensory and flavor profile names such as: sheep butt, road kill (dead deer on road ...cut off flesh), old dirty socks, sweat, rocks, dirt, Nerd candy and Big League Chew gum. He even went as far as to sniff armpits, lick rocks and eat dirt to get his point across.

Those of us who didn't know a thing about football, would soon be kept up on the scores and schedules of the New York Jets as, not only would he wear the Jet jerseys, but even his spit bucket was adorned with hunter green and white decals of his beloved football team.

"Gary Vay! Ner! Chuk!," as he often introduced himself at the beginning of his videos, inspired many of us wine geeks to film our own talking head videos, to author books, grasp social media and to seize the opportunity to become entrepreneurs. In August 06, 2008, I was thrilled to be able to interview Gary in Four Wine Questions For: Gary Vaynerchuk

We watched Gary on main stream TV such as "Ellen" and also "Conan." We kept up on his new books and we all awaited the birth of his first child in 2009 - a girl. His audience followed him around the world and he never forgot about Washington State Wine Country and even reminded his audience in one video with a handwritten poster behind him that said "Wash St. is REAL".

In one of the many videos he would eventually do about Washington State, Gary even filmed in front of the Qwest Field in Seattle in a smack down of Washington State vs New York Riesling (you'll have to watch to find out who the winner was).

Gary once said, "Walla Walla, Washington is the most exciting thing happening to wine in the country."

And Gary proved it with his many videos about Walla Walla wines, in particular Finding Walla Walla, Walla Walla College Cellars in Five Colleges Battle it Out and A Very Cool Winemaker - our very own Charles Smith. 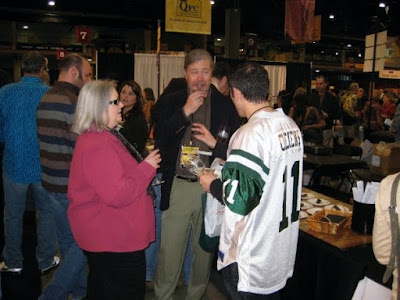 Thank you Gary for blazing a trail for many of us wine bloggers, vloggers and pod casters. Thank you for giving wine lovers, and especially new wine lovers, the confidence to learn, to enjoy and the ability to express themselves about wine. No doubt, we will see you again. Best wishes in the next chapter of your life.

So glad we found your blog...we are coming to Walla Walla to do our "Junk Salvation" Vintage Flea Market at the Walla Walla Fairgrounds on Oct 8th and we want to do some wine tasting while we are in town! Your blog looks like it can help us discover the fab wines of the region!

Sad to see him go! I'll keep an eye out for him.

Sad to see him go. I like to watch his shows while eating lunch. Almost like drinking.