People often ask me, "What is your favorite wine?" That's really a tough question. It depends on my mood, vintage, season and sometimes even a wine that is based on a past or recent memory or event. Sometimes I will even have a new favorite, "Wine of the Month."

Again, it always varies. However, I do have a wine that when people persist on me giving them answer of only one wine, I reach into the wine scrapbook of my brain and usually answer, "Walla Walla Vintners Cabernet Franc."

Walla Walla Vintners, owned by Myles Anderson and Gordon Venneri, is a winery dedicated to making handcrafted red wines. It all started when Gordy took a trip to Calabria in Southern 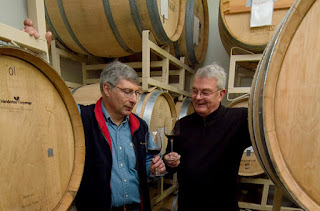 Italy to visit family and sampled his family's homemade wines. He returned with a desire to make wine and it was then Gordy and Myles started producing their own batches of wine. In 1995, they made it official and began their adventure in producing limited quantities of Cabernet Franc, Cabernet Sauvignon, Cuvée, Malbec, Merlot, and Sangiovese. And like their title, they specialize in making wines from grapes grown in the Walla Walla AVA.

They are still crafting their wines like they did when they first started home winemaking using traditional, yet labor-intensive, techniques, such as fruit sorting and picking by hand, manual punch downs in open-top fermenters, gentle extracting in a basket press, individual topping off barrels and hand racking each barrel four times a year. The wines are unfiltered, unfined

and cellared in separate vineyard lots. "Free run” and “pressed wines” are placed in separate barrels for aging, and then later blended by the team's "picky palates."

I believe that if I go back through my wine notes, I will have tasted every vintage of Walla Walla Vintners Cabernet Franc starting with 1995. Cabernet Franc also happens to be the flagship wine for Walla Walla Vintners. Their recent 2009 vintage is 85% Cabernet Franc with 12% Merlot and 3% Cabernet Sauvignon. The nose is definitely that of cigar box and candied walnuts. The mid-palate reminds me of the rich sticky toffee date cake that I savored in Sydney, Australia and have never been able to get out of my mind. The toffee continues on the palate along with flavors of cocoa. Each vintage of their Cabernet Franc often takes me back to the special moment when I was sipping on this particular wine. - - 2011 Seattle Wine Awards Gold Winner.

PROSSER, WA (Press Release) — Founding Director of the Institute for Enology and Viticulture at Walla Walla Community College and owner/winemaker of Walla Walla Vintners, Dr. Myles J. Anderson was selected as the 2011 inductee to the Legends of Washington Wine Hall of Fame.

The Walter Clore Wine and Culinary honored Dr. Anderson during the 2011 Legends of Washington Wine induction gala held on Friday, August 12, 2011 on the grounds of the Clore Center in Prosser. 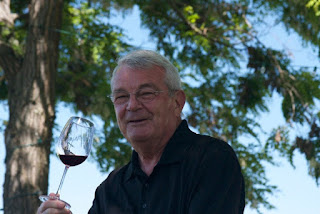 As the author of several instructional texts, Anderson was charged with developing and launching the enology and viticulture program at Walla Walla Community College in 2000. More than 1,600 students have completed enology and viticulture coursework since the program was launched. Dr. Anderson continues to consult with College Cellars and also serves on the advisory committee of the Institute for Enology and Viticulture. A 31-year employee, Anderson also served as counselor, instructor and administrator for Walla Walla Community College.

Legends of Washington Wine are selected for their contributions of historical and lasting significance to the community and the wine industry. Nominations are received from the public, and an industry-based selection committee evaluates and scores recommendations based on specific criteria.
Posted by wild walla walla wine woman at 8:22 PM